Sooner or later, you will be contacted by an IT staffing firm whom will wax poetic on their best practices. To that I say, let's analyze a few of them...

Recruiting Process: Clients hire staffing partners to do something clients aren't capable of doing internally. If that is the case, why do you see so many agencies posting client requisitions on job boards. Is there much value being added in an agency firm spamming Monster and every LinkedIn group they can access?

Turnover: There are times where clients go to staffing firms for access to low-cost resources. This however doesn't mean that clients want frequent resource turnover. This is almost guaranteed in scenarios where staffing firms want to maintain margin by sticking it to candidates. Sadly, turnover doesn't just effect candidates and also applies to staffing firm personnel as well. Why are these positions filled with college grads, professionals who failed as sales people or even worse homemakers who are looking to make spare change.

Database: Yes, your database is proprietary, only that it is probably not a real database. At best it is a contact application that maintains a file pointer to a resume. I do acknowledge that it is filled with more names than you know what to do with, but what is its value over simply searching LinkedIn?

Loyalty: What good is a big database if few candidates contained within want to do business with you? Let's face it, there is little loyalty in the world of staffing. If you only reach out to candidates when you have an "opportunity" but otherwise can hear crickets on the other end when they reach out to you, then what should clients expect?

Job Descriptions: Candidates are more than capable of reading a job description, so you don't need to read it to them. What you do need to do is proactively have answers to candidate questions such as the type of work, the compensation, amount of travel if applicable and of course a sense of the role related to work/life balance.

While I hate the supposed bureaucracy that can emerge from zero-based budgeting, I believe there is an immense opportunity to eliminate wasteful spending as well. If IT wants to align with the business, it has to have clear insight into past, present and future spend and focus on utilizing money in the best way possible...

What is the purpose of education?

Dropout rates are increasing and American kids simply aren't keeping up with kids in education. I wonder if the towns you live in and their boards of education have any level of understanding that kids might be bored of education?

As a parent of two school-aged children, I sometimes wonder if I am alone in observing the increasing mismatch between traditional curricular standards of content-based instruction and the new forms of thinking required by our digital, distributed workplace?

We are no longer in the industrial age where routine thinking skills were a core requirement. Henry Ford was a proponent of education primarily to create a steady supplier of workers for his factories and to ultimately turn them into customers. Today, those routine thinking skills are increasingly performed by machines or outsourced to countries with lower standards of living and freedom than the United States.

Regardless of whether you have children of your own, taking an interest in how the board of education either fulfills or fails in educating children should be of interest to you. If you have a pension, a 401K or any type of investment, the ability for it to provide a return in your retirement is directly correlated to the success or lack of the ability for the board of education to make education less boring...

In reflecting on my career, I am come to appreciate that I have done many things wrong but also a few things right. First and foremost, I think the thing that I got right was the acknowledgement that in order to have a career, one doesn't have to dedicate and inordinate amount of time and energy but must be savage in their devotion to their trade/craft.

I am the poster child for the introvert community, yet I am savage when it comes to extroverted activities and the need to connect to others. I spend a lot of time on LinkedIn understanding who are the movers and shakers in hopes of catching an emerging trend before someone else. I use Twitter specifically to connect, interact, and network with various communities of interest to me whether it is about enterprise architecture, information security, martial arts or even sophomoric humor. Through these interactions, I have been lucky enough to make some good friends.

I have been fortunate enough to find a group of like-minded individuals who listen to my rants and screeds and openly amplify them with passion. The people who have made me successful are the ones who themselves have embraced their otherwise unknown celebrity status to not just improve our trade/craft but to also improve the human condition. Whether it is support for noble charities such as the Wounded Warrior Project or initiatives such as Kiva, they are doing their best to help others do their best.

In the circles I travel, I have surrounded myself with successful people who are selfless. They are consummate professionals who engage in giving speeches at industry conferences, sharing their thoughts via blogs and even contributing to open source projects even though they have a day job and a family.  They never make excuses about how busy they are and always find time to do the right thing.

Picture yourself as a grad student at a major university asking yourself and others what is the incentive structure for research? You write amazing things in cryptic university-like humorless monotone in order to get them published in journals that are not read by practitioners very often. Now compare the ability to write in the human voice using social media where you can simply post something that can be seen, read and interacted on by tens of thousands of people overnight. How should a modern college student rationalize this experience?

As someone who has been published in prestigious journals such as the IEEE Security and Privacy, I cannot answer understand why I did this, what was I chasing and what was the prize I won after being successful in completing the mission.

Should I find other soapboxes to share my rants and screeds, kinda of like what I am doing now? My two sons who are respectively eight and eleven already have accomplished more in the way of peer review, broadening the body of knowledge and other altruistic goals by simply participating in creating content via Twitter and YouTube. As a parent, if they were to ask their college educated Dad, whether they should handcuff themselves to closed source models of peer review, I wouldn't know what to say. I suspect that many of my college-educated peers would be in the same predicament.

As a book author, I have come to learn that much of the peer review processes are less about livability and more about acceptability. Peer reviews are all about gaining consensus approval rather than actually creating something new, compelling and innovative. The marketplace rewards innovators over mere publishers. Look at the business models of Apple and compare it to publishing houses who still maintain old world thinking. One is growing and the other is dying. I hope you are smart enough to understand which is which.

A university should educate, stimulate and titillate the mind expanding beyond arbitrary borders which many do a fine job in achieving. I still however wonder why sage wisdom allows antiquated research models that have proven themselves ancient to still survive. They are on life support and are dying slowly. We need some heroism Kevorkian style. Are there any University Professors willing to pull the plug...

Should the Government Expose those who are lawful Permit Holders?

Without getting too political, I am of the belief that the government should NOT expose the information of those who lawfully hold gun permits. If this information was exposed, it could lead to interesting consequences.

If you are a lawful permit holder and also gainfully employed where you can't bring your guns to work with you, don't you think you just provided a map for criminals looking for weapons to easily find them? The other side of the argument says that criminals may also have a map to those who are not armed, making it easier to commit henous crimes against people who cannot defend themselves with deadly force.

The topic of gun control is politically charged which will cause stupid legislation to occur. What if we instead focused on mental health which both Democrats and Republicans can agree are necessary to address?  We have to be very careful as to what personal information we expose and should establish boundaries as to what one does or even has in their own home. After all, I suspect we all have habits that we wouldn't want to be made public due to legislation...

Government IT procurement processes are a big fat joke!

I have always scratched my head as to why the Government needs to have bureaucratic procurement processes that are incredibly slow and time consuming. If you understand that people want to be paid for their time, then increasing the amount of time spent will result in an increase in the amount charged.

In the enterprise sector, it is almost rare for a large contractor to beholden to a single enterprise. The supplier wants to diversify their revenue sources. Enterprises equally want to see other enterprises as customers of the supplier which may be reflected in reference checks or other practices. There are situations where the suppliers to the government have only one customer and the procurement process has the ability to destroy the competitive market and create monopoly suppliers.

Taxpayers can't afford the kind of "transparency and accountability" that has developed. Worse yet, the ability to foster proper relationships has been eroded by "manufactured" procurement scandals such that buyers isolate themselves from the information they need to make good decisions, or structure mutually beneficial contractual relationships.

Part of solving the fiscal cliff is not to just pontificate about government transparency but to ensure they are using best practices of large enterprises and not just ones invented within the government itself... 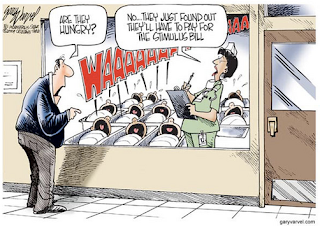