Ruby and the Struggle of the Perspectives...

Lot of folks have chimed in on a previous posting on Ruby and responded with passion and supplied their own perspectives but zero facts. One of the reasons I blog is that in my travels, I tend to talk to lots of folks and hear interesting perspectives in which I share here. My blog clearly mentions that I talk about the human aspects of technology. Some folks will get it twisted and think just because I wrote it, means that I must believe in them...

I am probably guilty of assuming that folks would come to understand alternative perspectives over time and not simply react without understanding a larger context. One person assumed that because I mentioned Duke Energy that I must somehow work for them. Wrong! My mention of Duke Energy was do to the fact that they are a large enterprise that not only uses open source but has taken direct action in order to give back. I simply want others to understand their perspective and desire that folks who work for magazines start telling this story. I wonder if Chad Dickerson could provide insight into how to make this happen.

Another incorrect perspective is that I somehow believe in analyst conferences are the holy grail. Not! For the record, I have never in my entire lifetime ever attended a single industry analyst conference nor have any current plans to do so. Folks who threw out this assertion also suggested that I didn't know how to use google when I could say the same thing of them as they would see no less than ten posts on my thoughts on industry analysis.

Some folks have assumed that since a large percentage of my photos show republicans in amusing ways that I must somehow be a democrat. Not!

Still others responded based on my comments on books within the marketplace and assumed that my comments were because I wanted to somehow promote my own books. Not! Bet you didn't know that all those books that won the Jolt awards had to pay a fee of several hundred dollars and that they weren't selected from the entire universe of books on the subject? If you have a contest where everyone is welcome to pay a fee, yet only one book within a category does and then is declared a winner, shouldn't that bother the community especially if the author hides this fact? 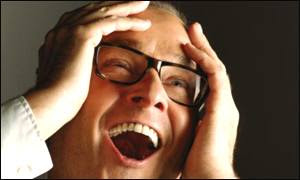 Still another perspective is that I am a thought follower and defer my entire thought process to the wisdom provided by large consulting firms. Wrong! I simply acknowledged that this is a behavior whether right or wrong hapens in corporate America.

I find it somewhat amusing that others still believe that I am a big believer in only acquiring technology through large software vendors. Reality dictates otherwise. One may have noticed that I have several venture capital bloggers on my blogroll who fund startups that may have at best ten employees. If you look historically at my blog, I have encouraged others to look at a variety of small companies.

I still cannot stop laughing about the postings regarding me being too enterprise. These are from folks who have obviously never met me or even engaged in an open conversation. I suspect their perspectives would change if they did so...

One of the things that I did learn in this undertaking is that the blogosphere works pretty much like corporate America and that many of the folks that went on a rant are more corporate than they think. In many of the environments that I have worked in, whenever someone makes a slip there are folks who will capitalize on it for their own benefit. It is rare in corporate America to find folks who have a genuine interest in helping each other and do so without attacking in some form or fashion.

The dialog (for lack of a better word) with the Ruby community generated more traffic that I had expected. I promised within my blog entry to respond to each and every person's question as I hoped to bring about alternative perspectives which was a fatal mistake. In responding to over 100 different folks, I started to journal the response across multiple posts promising to address each language within a separate entry. A couple of folks responded with comments in the dialog with statements about Rexx, PHP and Smalltalk in which I inserted in my thought process and responded to as if it was about Ruby. I later went back and edited this particular aspect as I thought it was important for the posting to reflect what I was thinking at the time in the most accurate way possible (NOTE: The changes were contained in all of two sentences. 95% of the posting did not change). I guess some folks felt that I was attempting to hide something which as a thought didn't even enter my mind. I guess I somehow violated some rule of the blogosphere that I wasn't aware of. Maybe, I too didn't get the memo.

Anyway, I hope that the Ruby community can at least respond going forward with facts instead of merely their perspective on the enterprise and provide an answer to the below questions. I am willing to put my money where my mouth is and make a donation of $500 to any of the charities listed within my blog or any other mutually agreed upon charity for anyone that can provide fact on any of the below questions within the next thirty days:

1. Please provide the URL to any publicly available case study on Ruby where it is being used by a Fortune 200 enterprise where it is the primary development language for an enterprise application (using any definition I have mentioned in the past within my blog, sorry you can't make up your own) that is currently in production.

2. Please provide the name of any full-time employee (not consultant) of any Fortune 100 enterprise that will be speaking at any conference (or user groups where attendance is over 500) that will focus on their usage of Ruby. Also include the URL to the conference brochure.

3. A copy of any major IT publication (e.g. Infoworld, eWeek, etc) that has circulation over 50,000 copies where a single IT executive of a Fortune 200 enterprise will be on the front cover and within the article, they mention they are displacing other languages in favor of Ruby.

One rule is that Fortune enterprises mentioned must not have their primary business in technology. Another rule I ask is that any responses to this posting stay exclusively focused on Ruby and not any of the other dynamic languages so that I don't repeat the same mistake in future responses.

I am asking the Ruby community to please prove me wrong with facts as I really want to give monies to charity and need your help. While I value any additional perspectives that may emerge from this type of questioning, I do ask that you not "read into" my motivation for asking them...

NOTE: I will be deleting all responses that are not fact-based...